Owning historic letters and signatures gives you the power to do something incredible:

They allow you to time travel.

To literally touch a moment from the past.

They make you feel part of something bigger.

That's why we collect them.

So as I sit at my desk, it's incredible to think that exactly 207 years ago to this very day...

Napoleon Bonaparte signed the piece of paper in front of me.

It's a direct connection to the greatest military leader in history.

You can almost feel the energy crackling off the page.

And it's yours to own - if you act quickly. 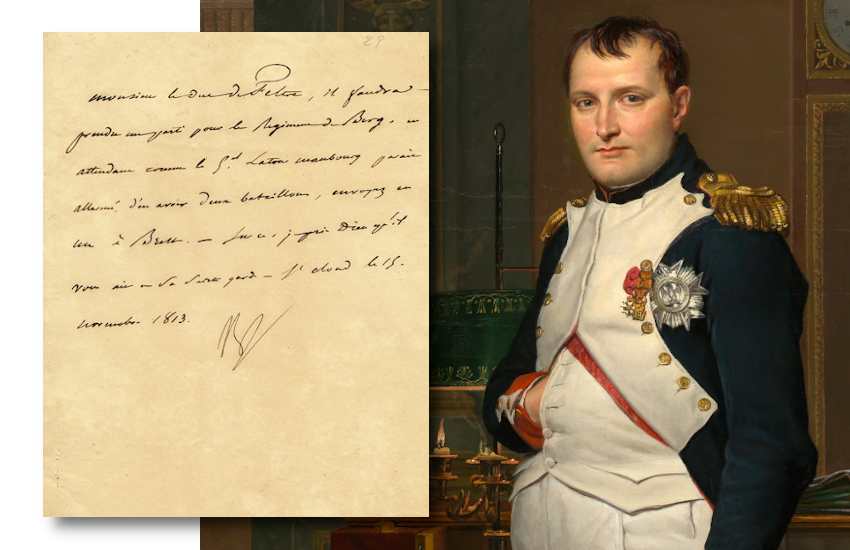 This rare Napoleon Bonaparte signed note was sent just one month after his crushing defeat at the Battle of Leipzig.

Napoleon dictated, signed and sent this note on November 19, 1813.

It's addressed to the Duke of Feltre, General Henri Clarke – one of Napoleon's top military aides.

It reads: "We will have to make a decision concerning the Berg Regiment, meanwhile as having two of its battalions seems to worry General Latour Maubourg, send one to Brest. On this I pray god to keep you under his divine protection."

At the time Napoleon was desperately rearranging his troops, following crushing defeat at the Battle of Leipzig one month earlier.

As the finest military leader of his age, Napoleon still believed he could win the war against the Allies - but in reality, there was no coming back.

Having once dominated Europe, he was forced to retreat to France. And less than six months later he was exiled to Elba as a broken man.

Every letter he sent during this period tells a part of that story.

And to collectors of historic memorabilia, they're like gold dust. 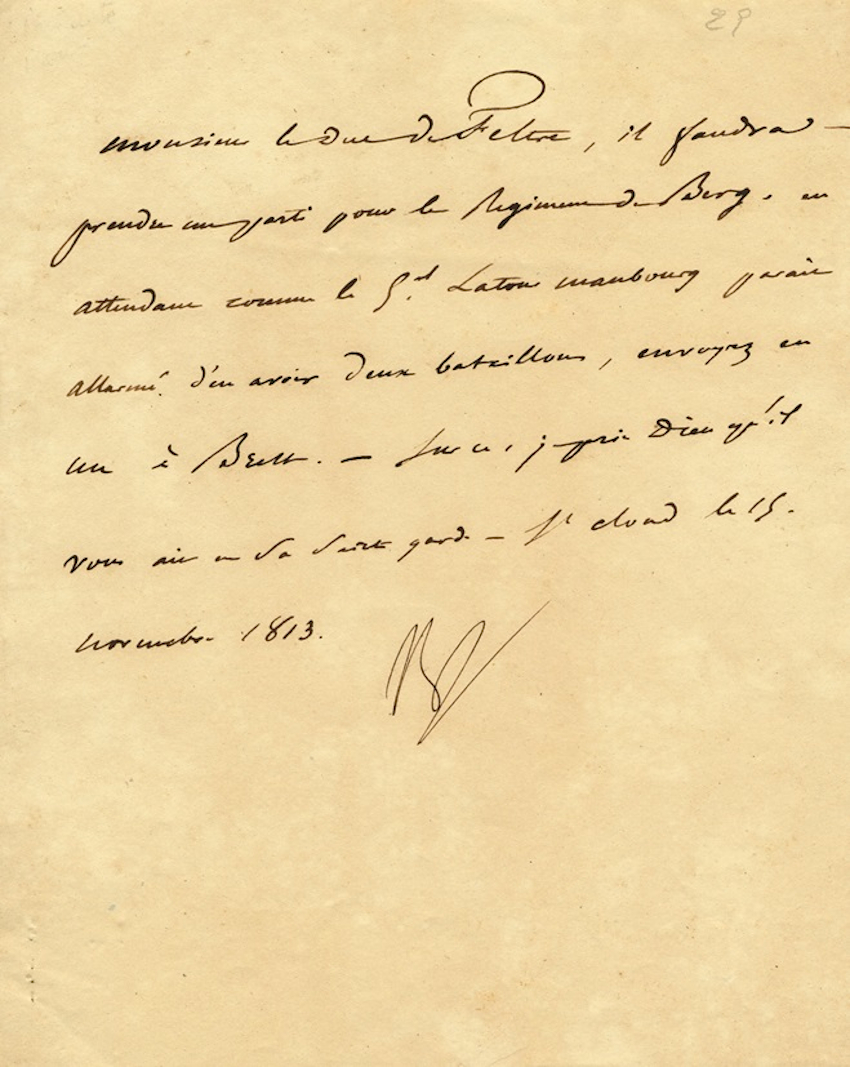 The note is precisely 207 years old - but is so well preserved it looks like it was written yesterday.

This note features a truly superb example of Napoleon's signature.

No fading. No smudging.

As crisp and fresh as the moment he signed it, exactly 207 years ago today.

The note itself is also in excellent condition.

It's perfect for framing, and will make a wonderful display piece in any setting.

And owning it will instantly elevate your collection. 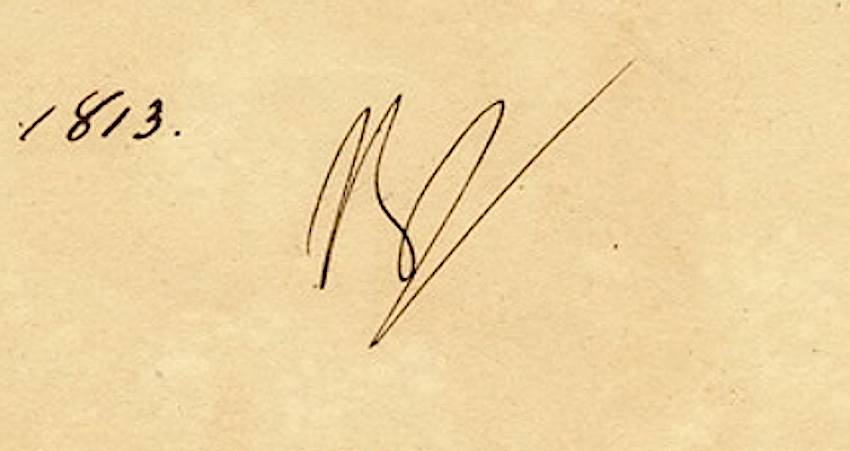 Napoleon signatures don't come much clearer or crisper than this.

This is the first new Napoleon signature I've had in stock all year.

They've always been rare – that's why they sell within a few days (or sometimes hours) of arrival.

But recently they've become even harder to source.

That's because more and more investors are adding historic signatures to their long-term portfolios.

In uncertain times, and faced with a volatile financial market, figures like Napoleon, Abraham Lincoln and Winston Churchill are seen as safe bets.

You can understand their reasoning.

Napoleon's role in history is immense. He literally shaped the modern world.

And another paid $6.4 MILLION to own the sword from his Italian campaign.

The PFC40 Autograph Index shows that the value of a Napoleon signed note has increased by 9% per annum over the past 20 years.

I've been advising clients on how to invest in autographs for years – but now everyone wants in on the action.

And that increased competition means you have to act quickly... 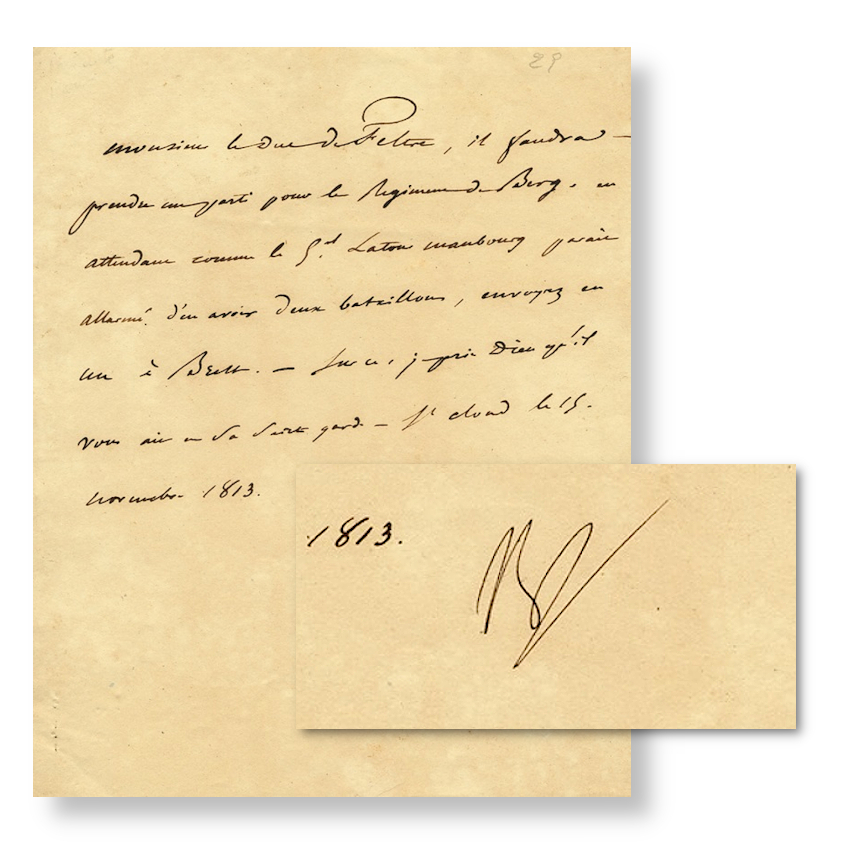 If you want to add this note to your collection, you'll need to be swift and decisive - just like the man in question.

This Napoleon signed note is fresh in stock.

It went live on my website just half an hour before I sent this email.

It's a superb example of his autograph that will sit proudly in any historic collection.

The note is in excellent condition and ideal for display.

And it features military content, which makes it especially desirable for collectors.

Napoleon signed notes like this are rare, and becoming even rarer.

Demand has increased significantly over the past 12 months, as the best examples are snapped up and locked away in long-term collections.

So if you want to own this superb Napoleon signature, I suggest you act swiftly. 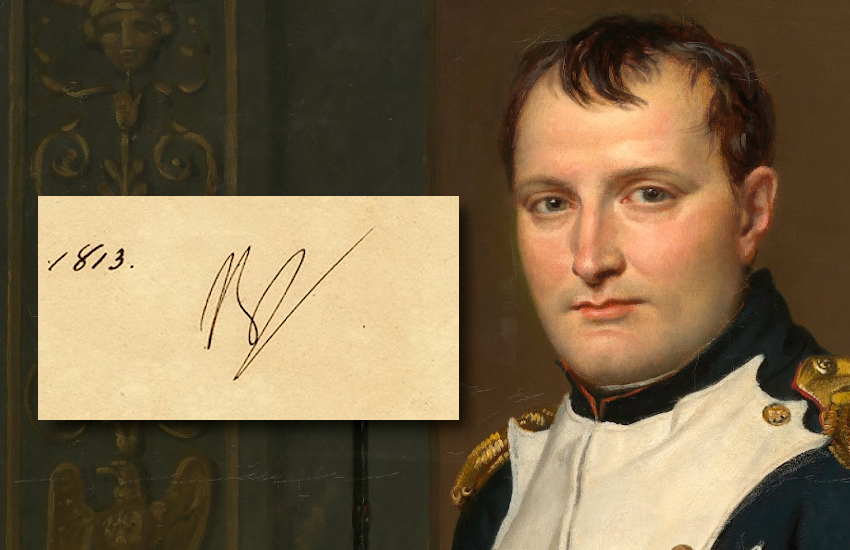 Napoleon is a true 'blue chip' signature, with a proven track record of increasing with value over time.

Let me make it even easier for you.

I've been selling and authenticating autographs for over 40 years, so I understand how important it is to give my clients peace of mind.

That's why this note comes with my Certificate of Authenticity and my personal Lifetime Moneyback Guarantee.

This means you can buy in complete confidence that it's 100% genuine.

PS. This item is also available to buy in 12 monthly instalments under my layaway plan. Contact me now to find out more.