There's a story behind every autograph.

As collectors, we all love to tell them.

Some are better than others.

But the one I've got for you today is sensational.

And the most famous woman of the 20th century.

This special item can be yours to own.

The story can be yours to tell.

And the star of the show is Marilyn Monroe. 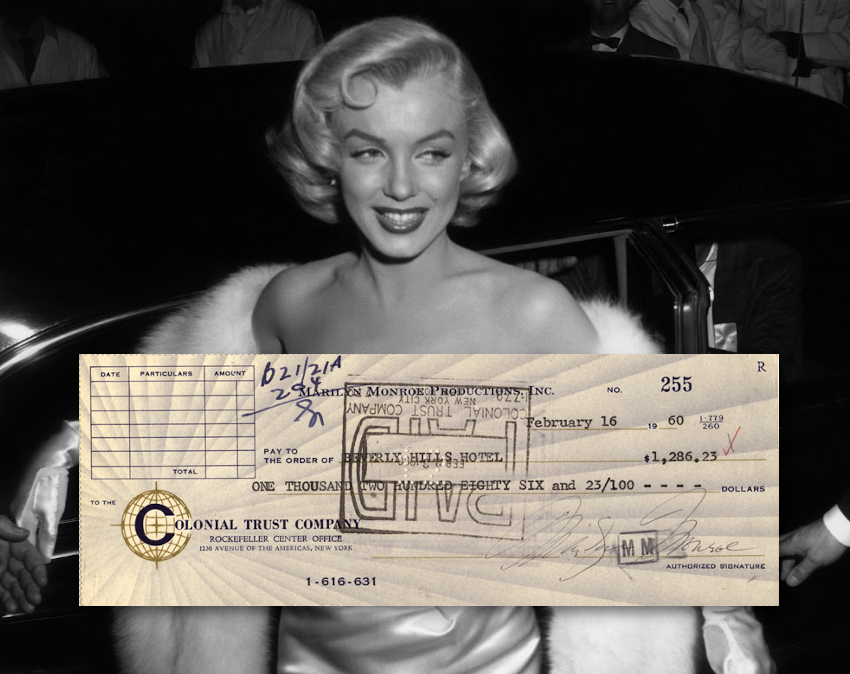 This isn't just a Marilyn Monroe signed cheque. It's a piece of her legend...

This is a fantastic Marilyn Monroe autographed bank cheque.

Beautifully signed in 1960, just two years before her death.

It's a rare piece of Hollywood memorabilia in superb condition, worthy of any collection.

Autographed bank cheques are one of the most popular areas in the hobby.

You won't see many better examples than this.

And it's completely fresh to the store, as it only arrived on my desk this week.

But as I did my research I discovered something remarkable.

The details on this bank cheque reveal a sordid story from Marilyn Monroe's life.

The cheque is dated February 16, and is made out to the Beverly Hills Hotel.

So this cheque must surely have paid for Monroe's stay at the luxury hotel.

In her favourite private bungalow, 21A.

Where she had her famous affair with actor Yves Montand. 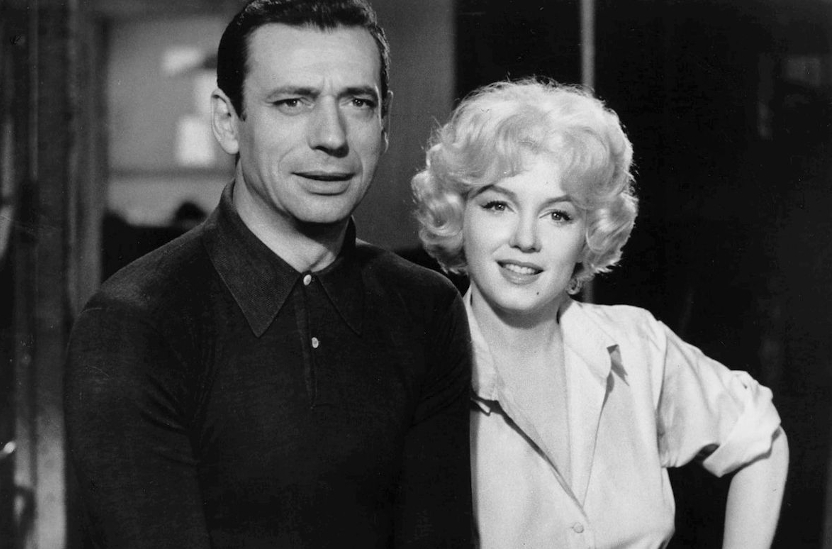 Monroe had a famous love affair with French actor Yves Montand, during production on the aptly-titled 1960 film Let's Make Love.

Monroe and her husband Arthur Miller moved into the hotel in January 1960, as she filmed the romantic comedy Let's Make Love.

In the bungalow next door (20A) were her co-star, French actor Yves Montand and his wife, actress Simone Signoret.

The two couples soon became inseparable, and they were often photographed in deep discussions over dinner in the hotel. 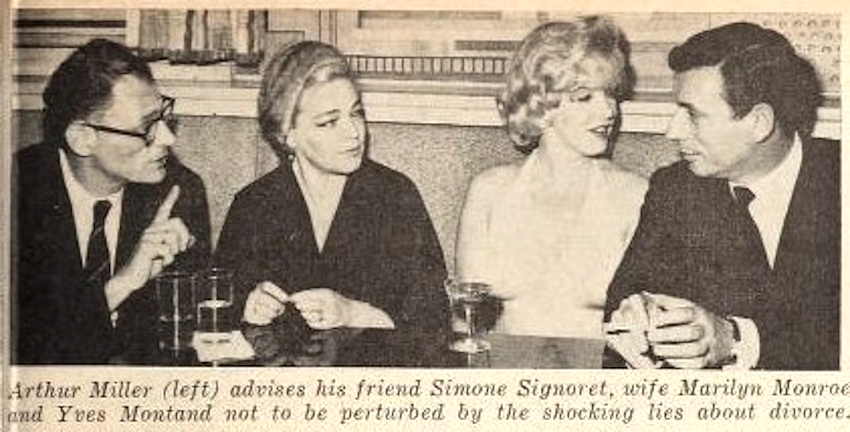 But behind the scenes Monroe's marriage was crumbling. And Montand was well known for his roving eye.

So when Miller returned to New York on business, and Signoret left for a film shoot, the pair began a not-so-secret affair.

According to legend, Monroe once greeted Montand at her hotel door wearing a mink fur coat and nothing else.

And the Hollywood gossip columns went into overdrive.

When filming was over a few weeks later, the pair ended their affair and left the Beverly Hills Hotel.

Monroe went back to Miller in New York but their already fraught relationship never recovered, and they divorced the following year.

She may have paid for her hotel room with this cheque - but she paid for the affair with her marriage.

Marilyn Monroe's signature on the cheque for her famous 1960 stay at the Beverly Hills Hotel.

When it comes to the memorabilia market, there's nobody bigger than Marilyn Monroe.

She's simply the most iconic woman of the 20th century.

Sixty years on, her movies still delight audiences and her personal life fascinates fans around the world.

That's why her dresses sell for millions, and her personal items fetch six-figure sums.

The value of her autograph alone has risen 9% per annum on average for the past 20 years.

When it comes to Marilyn Monroe memorabilia, that's never been truer. 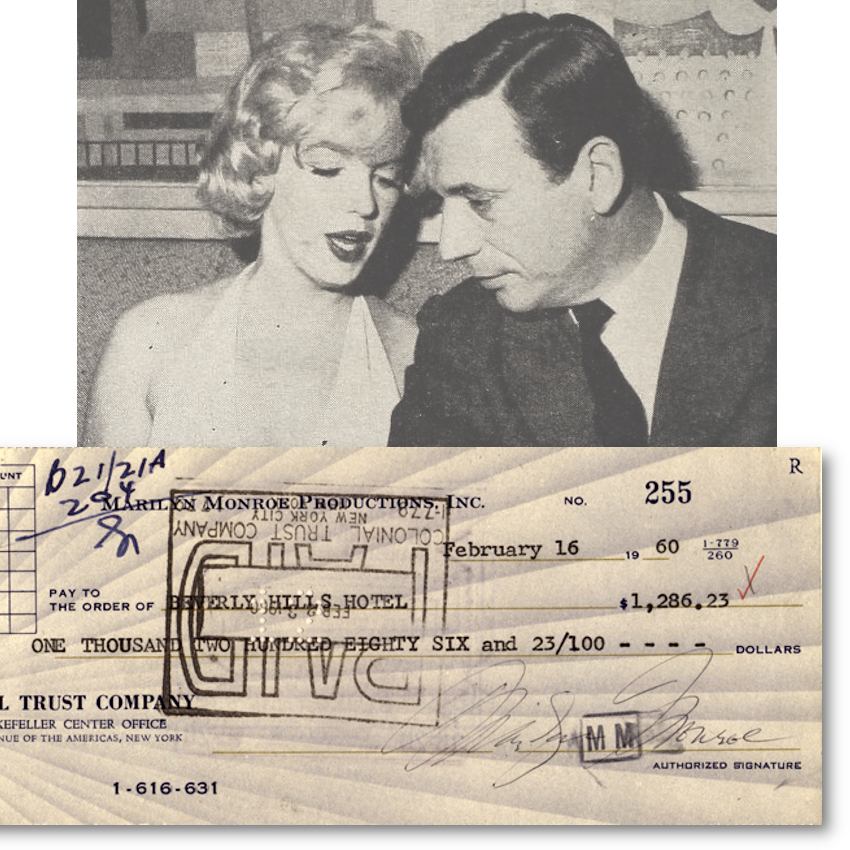 This incredible signed cheque could be directly linked to one of Marilyn Monroe's most famous love affairs.

I've handled hundreds of Marilyn Monroe signatures in my career.

Rarely has one played such a significant role in her life as this one.

On the quality and condition alone, I'd recommend it to any of my clients.

But the back-story makes it more than a simple autograph.

Now it's a real piece of the Marilyn Monroe legend.

And the centrepiece to your collection.

This signed cheque comes with my Certificate of Authenticity and my personal Lifetime Moneyback Guarantee.

I've been authenticating Marilyn Monroe signatures for over 40 years, and I can guarantee that's its the genuine article.

So buy it today, or email me right away at info@paulfrasercollectibles.com to reserve it for your collection.

PS. Autographs with the best back-stories always sell the quickest. If you want to own it - act now.