Today marks the loss of one of music's greatest voices.

A singer with the power to transcend race and genre.

A man known as 'The King of Soul'.

It was on this day in 1967 that Otis Redding died in a tragic plane crash.

But his influence on modern music is immeasurable.

I've just received a piece of Otis Redding memorabilia that would grace any collection.

And now you're the first to see it. 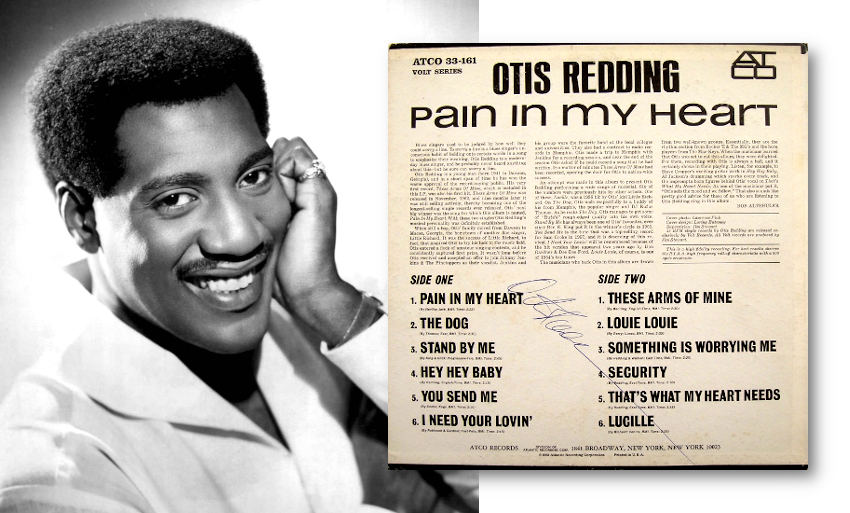 It's a copy of Redding's debut album Pain in My Heart, released on Atco Records in March 1964.

It's one of the most celebrated soul albums of the 1960s.

And it's beautifully signed by the man himself.

Let me tell you – this is a seriously rare signed album.

Although he first found success with Stax Records in 1962, Otis Redding was only truly famous for around three years, from the release of his debut L.P until his sudden death in 1967.

But in such a short period of time he made an enormous impact.

He left behind a string of hit singles, classic albums, soaring live performances and a musical legacy which has influenced generations of artists.

What he didn't leave behind were many autographs. 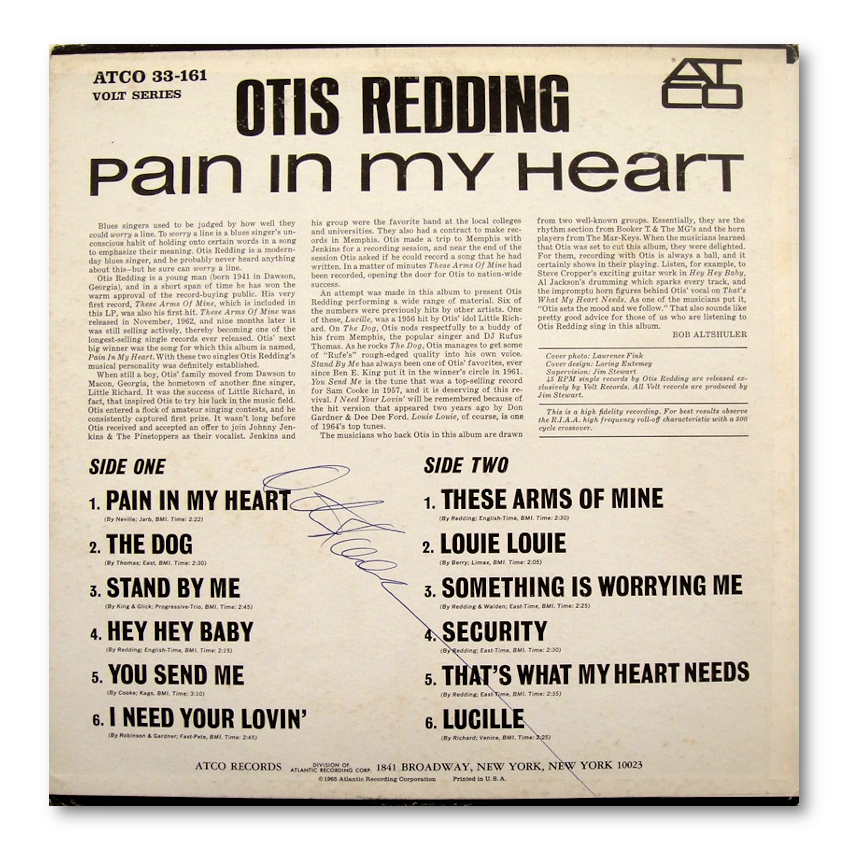 Redding died tragically at just 26, and left behind very few signed albums such as this one.

This is a superb example of that autograph.

Signed clearly and crisply in blue ink against a white background on the reverse of the sleeve.

No smudging or fading. And no personal dedication.

This is what every collector looks for in a signature.

It's definitely what I look for as a dealer. I wish they were all this good! 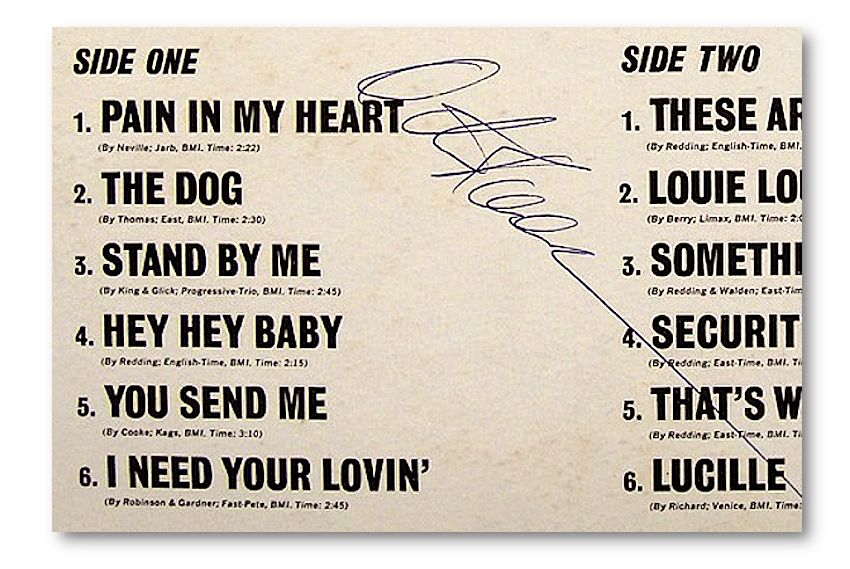 Redding's signature is crisp and clear with no dedication - perfect for today's collectors.

Today Otis Redding is one regarded as of the most important artists in popular music.

Every one hailed Otis Redding as a major influence.

And he wrote timeless classics which remain with us more than 50 years on.

Respect. Hard to Handle. I've Been Loving You Too Long.

And his undoubted masterpiece (Sittin' On) The Dock of the Bay.

That song sold four million copies, and went to #1 on both sides of the Atlantic.

But sadly, Redding wasn't around to enjoy it.

Just four days after recording the track, on December 10, 1967, his plane went down near Madison, Wisonsin.

And like that - one of the greatest artists of his generation was gone forever. 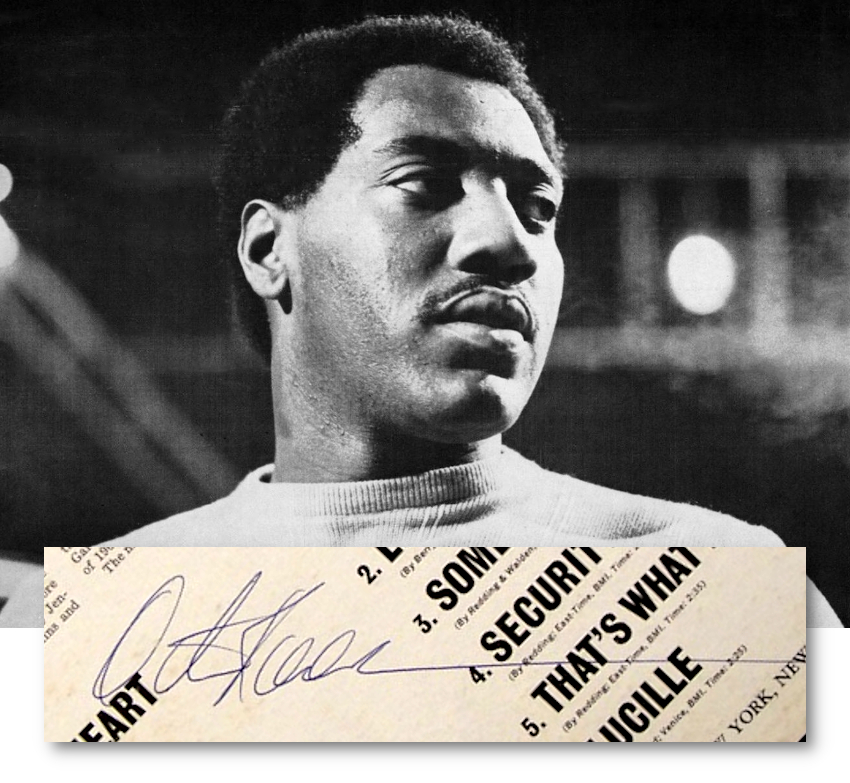 Otis Redding influenced everyone from The Beatles to Jimi Hendrix - and his autograph should be part of any serious sixties music collection.

The most valuable autographs in music belong to those we lost too soon.

Each of them died before their time, leaving musical legacies that grow stronger every day.

And each of them are highly prized by collectors.

His tragically short life means his autographs are scarce.

Signed albums are even rarer.

And authentic signed copies of his earliest album are almost non-existent.

I've only seen a handful in my 40+ year career, and this is the finest example I've ever come across.

If you're a collector with a passion for 1960s music, this is a must-have piece.

And if you're looking for peace of mind, let me make it easy for you.

This album comes with my Certificate of Authenticity and my personal Lifetime Moneyback Guarantee.

I've been authenticating music autographs for over 40 years. It's how I started my career, and it remains my passion to this day.

Not only is this signed Otis Redding album 100% genuine - it has everything you could want in a piece of music memorabilia.

So buy it today, or email me right away at info@paulfrasercollectibles.com to reserve it for your collection.

PS. This is the first Otis Redding signed album I've seen in years. It's a rare opportunity - so don't let it get away!