Around a month or so ago at PBA Galleries, an archive of Ernest Hemingway’s family photos came up for auction.

The young Ernest Hemingway stands awkwardly at the far right

A great set of collectible photographs from a great writer, but little more. They sold for $4,800.

Then, last night, I was channel hopping when I came across a documentary on Hemingway’s life. Having read a few of his books, I decided to give it a watch.

If nothing else, his famous Action Man-style machismo would keep me amused…

Hemingway with Pauline and his sons

I was surprised when the show featured a number of Hemingway’s relatives. It’s rare that any great writers’ family want to be interviewed, especially with the famously unhappy childhood that Hemingway’s children shared.

The man was stern and had little time for small children. One of his sons remembered being yelled at for making the smallest noise while his father was writing upstairs.

The model family: Pauline Pfeiffer worked for Vogue and showed little interest in her children

Their mother, Hemingway’s second wife Pauline Pfeiffer, was a socialite who worked in Paris for Vanity Fair and Vogue – she had little affection for the children, spurred by difficult pregnancies, and they would be ushered in to kiss her on the cheek before school, their only contact with her each day.

“I hated her guts!” Patrick Hemingway exclaimed in the documentary.

Hemingway shared an equally unhappy relationship with his own mother, but had a fondness for his father, whom he often favoured in his parents’ endless arguments: “I hate her guts and she hates mine,” he wrote in 1949. “She forced my father to suicide.”

Of course, Hemingway followed in his father’s footsteps. A heavy drinker, possibly suffering from bi-polar and severe depression, he shot himself in 1961.

A gloomy bunch, but it’s not just these two generations of the Hemingway family that have been blighted with this curse. 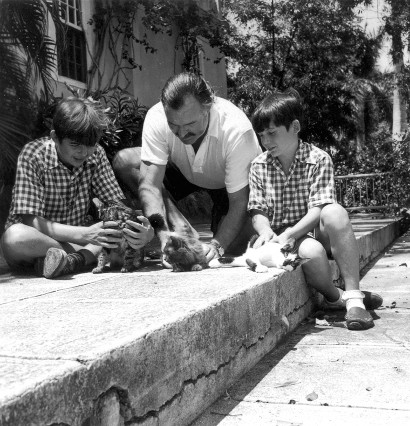 Hemingway and sons at the writer’s Finca in Cuba

In fact, in four generations of the Hemingway family, there has been five suicides – Ernest, his father, his sister Ursula, brother Leicester and granddaughter Margaux. Hemingway’s youngest son, Gregory, lived a chequered life after having gender reassignment surgery, and was described by Ernest as having “the biggest dark side in the family except me.” He died in 2001.

In the show I was watching, the two surviving brothers, Patrick and Jack explained they had a friendly competition to see how long a Hemingway can survive for. An old documentary, Jack died in 1991 following heart surgery.

But it seems there may be an answer to their family’s plight, albeit a little too late…

Both Hemingway and his father’s behaviour became increasingly erratic in their later years. His father was extremely paranoid, locking all the drawers in his home obsessively and distrusting all those around him. Ernest followed suit as he reached old age, becoming constantly worried about taxes and the FBI’s investigations into him.

Checking himself into the Mayo Clinic, he was treated for hypertension with electroconvulsive therapy. It was here that they discovered that Hemingway suffered from hemochromatosis, an overload of iron in the blood that causes mental and physical deterioration.

Exacerbated by his drinking, this was certainly a strong contributor to Hemingway’s suicide. What’s more, it was also revealed that his father might also have suffered with the hereditary disease.

Yet it’s not certain what exactly drove so many Hemingways to despair, with depression, the family’s secretive nature and other mental health issues also to blame.

The Hemingway memorial in Idaho

You can find out more in Running from Crazy, a 2013 film by Barbara Kopple starring Hemingway’s granddaughter and actress Mariel Hemingway.